Among the most physically demanding sports, rowing requires excellent conditioning. Upper body and leg strength are of equal importance as athletes row 1,500 meters (roughly one mile) in under six minutes.

Brought to the East Coast of the United States from Great Britain in the early 19th century, the sport is rich in sportsmanship and tradition – coxswains of winning boats are thrown into the water and the prize for the winner was literally the shirt off a competitor’s back.

In sweep rowing, rowers each use one oar in the coxed four and coxed eight events. In these events, sweep oars are positioned alternately on the sides of the boat, or shell. A coxswain steers the boat by pulling on wires attached to the rudder and advises the crew on racing tactics. The eight always carries a coxswain and is a remarkable event to watch; the boat is between 50 and 60 feet long (roughly the distance from home plate to the pitcher’s mound on a baseball field) and moves at nearly 15 mph.

Concord Crew mostly races Eights and Fours with a cox. In the spring the races are Sprints — fast, short (1,500 meters) distances where boats races against each other side-by-side. In the fall we compete in “head” races which are longer (roughly 3-miles) and boats start one at a time, about ten seconds apart, and race against the clock, but often pass each other as they wind down the course.

WHEN ARE THEY DOING IT RIGHT?

The four parts to the rowing stroke-

finish (oar out of the water, blade horizontal or feathered),

recovery (body forward, blade turned from horizontal to vertical or squared)-should all flow together in smooth powerful movement.

IN ADDITION, THE FOLLOWING ARE CRUCIAL FOR GOOD ROWING:

Clean catches of the oar blade — A lot of splash means the oars aren’t entering the water correctly. The catch should occur at the very end of the recovery, when the hands are as far ahead of the rower as possible.

Blade coordination — As the blades are brought out of the water, they should move horizontally at the same height, just above water.

Consistent speed — Shells move slowest at the catch, quickest at the release and through the recovery. A good crew times the catch at the right moment to maintain speed and reduce “check.”

The language of crew is unique and it takes a bit of getting used to. We hope this glossary will help.

Coxswain: Or “cox,” the person who steers the shell and is the on-the-water coach for the crew.

Launch: The motor boat that follows the rowers to coach, observe, and ensure safety.

Shell: The boat in which the rowers and cox sit. Concord Crew uses primarily Eight and Four oared shells with a cox. They are also referred to as an 8+ or 4+.

Catch: When the blade of the oar first enters the water with legs compressed, arms reaching forward. It is the most technically difficult part of the stroke to master and to coordinate among all rowers.

Drive: The legs push down, the back swings toward the bow, and the arms draw toward the body in one fluid motion. The oars actually bend or flex during the drive
like a pole vaulter’s pole.

Finish: At the end of the drive when the oar has released its flex, the hands push down (causing the oar to come out of the water) and away, and the rower feathers the blade
so it is parallel to the water. This is the second most difficult and second most important technical aspect of the stroke.

Recovery: Now that the oar is out of the water and feathered, the hands push away over the knees, the shoulders and back tilt forward, the knees lift and the body coasts back toward the catch, slowly compressing to get ready for the next stroke. A relaxed and clean recovery is important because the boat is “running” its fastest during this part of the stroke, and the crew that coaxes every possible inch of run out of each recovery is often the fastest.

Seat number: the number of the seat counted from the bow (front) of the boat to the stern (rear).

Stroke Seat: Seat eight in the boat. This rower is responsible for maintaining the stroke rate for the boat. The other rowers follower the stroke’s timing.

Sweep: One of the two disciplines of rowing – the one where rowers use only one oar. Pairs (for two people), fours
(for four people) and the eight are sweep boats. Pairs and fours may or may not have a coxswain. Eights always have a coxswain. (The other discipline is sculling where each rower has two oars and there is no coxswain.)

Scull: The 2nd discipline of rowing, where the rowers each have two oars.

Port: The left side of the boat, while facing forward in the direction of the movement.

Starboard: The right side of the boat, while facing forward in the direction of the movement.

Cox Box: The electronic device a coxswain uses that contains a microphone (there are several speakers spread throughout the shell) and a small computer that displays a stop watch, stroke rating and, sometimes, boat speed.

Power 10: A call for rowers to do 10 of their best, most powerful strokes. It’s a strategy used to pull ahead of a competitor.

Stern: the rear of the shell.

Bow: the front of the shell.

Regatta: competitions where multiple teams (crews) compete against each other.

Bow Loader: a boat where the coxswain position is in the bow as opposed to the stern. 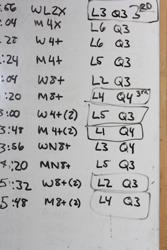 At the Regatta it is sometimes dizzying for novice spectators to decipher the acronyms used to designate a class of boat for a given race. Different letter, number or symbols are combined to identify the type of race happening out on the water.

Common abbreviations used to describe a boat are:

Discipline: class followed by an x is a sculling boat, no x indicates sweep boat

Coxswain: + indicates the boat has a coxswain, – means without coxswain

Boat number: When the crew launches more than one boat of a class a number is added for each boat: 1,2,3,4, etc.